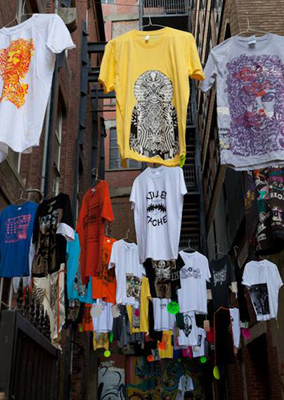 To coincide with the opening weekend of Hastings Arts Festival, Coastal Currents, we organized our first TShirt Pop Up shop in a back alley that had more than a passing resemblance to a New York equivalent. We invited 10 artists to take part in the 6 hour flash sale by supplying us with one off or short run editions to be sold exclusively on the day, for many of the artist it was the first time they had produced Tshirts. Approximately 40 shirts were sold during the event with a great response from the public to the concept and artwork on display. Further Pop Up adventures are planned. Artists who took part on the day included: Dr.Noki’s NHS, Screen Prince, Beccy McCray, Shaun Mills, Martin O’Neill, Grande Dame, Shuby, T(error)ist, Alex Cox and we had some classics from the Church of Sub-Genius and Bob Dobbs. More images and info coming soon. Photo by @alexbrattell